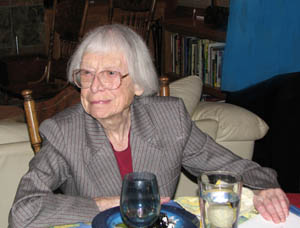 Hazel E. Barnes, Ph.D., was America's foremost Sartre scholar. As Hazel's literary executor, student and friend, Betty Cannon, Boulder Psychotherapy Institute President, is happy to answer questions from Hazel's many friends and admirers throughout the world. Betty's own book, Sartre and Psychoanalysis, is dedicated to Hazel.

Hazel translated Sartre's Being and Nothingness and Search for a Method. She is the person largely responsible for bringing existentialism to the English speaking world. She was Distinguished Professor of Philosophy Emerita of the University of Colorado and the recipient of many awards for teaching and scholarship. She mentored and influenced many of America's Sartre scholars. The prestigious Hazel Barnes Award is presented each year by CU to a talented faculty member for excellence in teaching and scholarship.

Hazel's own books, Humanistic Existentialism, Sartre, An Existentialist Ethics, Sartre and Flaubert, and The Story I Tell Myself, contain many insightful discussions of the significance of existential themes for psychology. Sartre himself loaned her the notes for the fourth volume of his monumental biography of Flaubert, which he was unable to finish because of blindness. Hazel reconstructed what Sartre might have written as well as discussing with precision and brilliance the four volumes that represent Sartre's final contribution to existential psychoanalysis.

Hazel produced a series of ten programs for National Public Television that were broadcast in 1962. Entitled "Self Encounter: A Study in Existentialism," they contain much material that is relevant to psychologists. Long thought to have been lost, they have been recently located in the Library of Congress by Jeffrey Ward Larsen and Erik Sween. Copies are currently available in the University of Colorado archives.

Betty Cannon and Jeffrey Ward Larsen are currently editing a collection of Hazel's essays for a major university press.